What do you think of when you think of an animal human parasite? I always tried to avoid thinking about them at all!

Realistically, though, we do need to think about parasites and how they can affect our health and the health of our family and pets.

You need to know about the various intestinal parasites symptoms as well as the best methods for natural parasite cleansing.

This page is going to cover the more technical terms and descriptions of the various types of animal human parasites.

A lot of this information has come from the Center for Disease Control and has been used with their kind permission.

The U.S. Center for Disease Control (CDC) estimates that the amount of parasites present in the United States alone number in the thousands.

It always amazes me the number of people (particularly Americans) who think that parasite problems are something that only third world countries have to deal with or concern themselves with.

In fact, in the modern world of travel, we are more vulnerable than ever of experiencing just about any type of parasite known to man, regardless of where we live on the globe.

"In terms of numbers there are more parasitic infections acquired in this country than in Africa."

~ Dr. Frank Nova, Chief of the Laboratory for Parasitic Diseases of the National Institute of Health.

They are categorized according to structure, shape, function, and reproductive ability.

One-celled microscopic organisms make up approximately 70 percent of all animal human parasites. They are invisible to the naked eye.

As a result of their intensely rapid reproductive ability, some protozoa can take over the intestinal tract of their host; and from there go on to other organs and tissues. Some feed on red blood cells.

Some protozoa produce cysts - closed sacs in which they may be safely transported through food and water from one person to another. In the cyst state, protozoa are safe from destruction by human digestive juices.

Many people don't realize that some types of parasites are transferred through intimate contact. 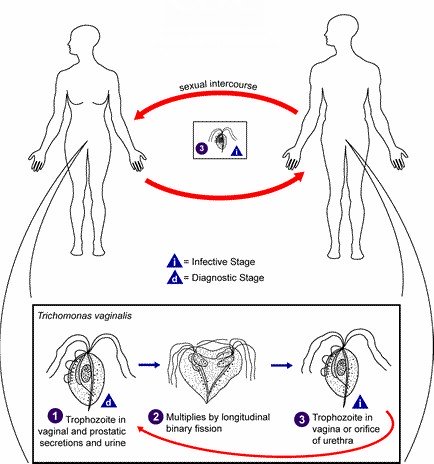 These one-celled 'vampires' can actually destroy the tissues of their hosts. According to experts, an estimated 7 million people across the U.S. have some form of protozoa living inside of them. Multi-cellular creatures called Nematodes can usually be seen by the naked eye. The adult worms multiply by producing eggs called ova or larvae. The eggs usually become infectious in soil or in an intermediate host before humans are infected.

It is interesting to note that unless the worm infection is heavy, many individuals do not show signs of disease. While it may be unpleasant to consider, it is true that the human host can coexist quite comfortably with a few worms, unless they reproduce in great numbers and create organ obstruction.

Experts claim that 'some type of worm is already in the intestines of over 75 percent of the world's population'.

“Pinworm - An extremely common nematode infection, particularly in temperate areas such as Western Europe and North America… It has been estimated that the annual incidence of infection is over 200 million, this probably being a conservative figure.  Samples of Caucasian children in the USA and Canada have shown incidences of infection of 30% to 80%, with similar levels in Europe.”
~ Parasitology Department of the University of Cambridge, England.

Tapeworms do not contain digestive tracts, but get their nourishment by absorbing partially digested substances from the host. They are whitish in color, flat, and ribbon-like, with a covering that is a transparent skin-like layer.

Trematodes are leaf-shaped flatworms also known as flukes. They are parasitic during nearly all of their life-cycle forms.

The cycle begins when larvae are released into freshwater by infected snails. The free-swimming larvae can then directly penetrate the skin of the human host or are ingested after encysting in or on various edible vegetation, fish, or crustaceans.